This one worked out really well - a great project for Roger from the Bureau of Silly Ideas.

Roger has a whole collection of entertaining mobile objects, used for theatrical performances in public spaces.

A pair of existing robo-bins were still functioning after two decades of use, but fast approaching retirement, so it was time to commission some new high-tech versions.

I decided to make a narrow chassis to keep most of the weight within the footprint of the three wheels. As the units are likely to get dropped out of the back of a van at some point, I made the steering column diameter 50mm, so that it was reasonably indestructible. The bolt spacings of the 50mm flange bearings then pretty much dictated the width of the frame. 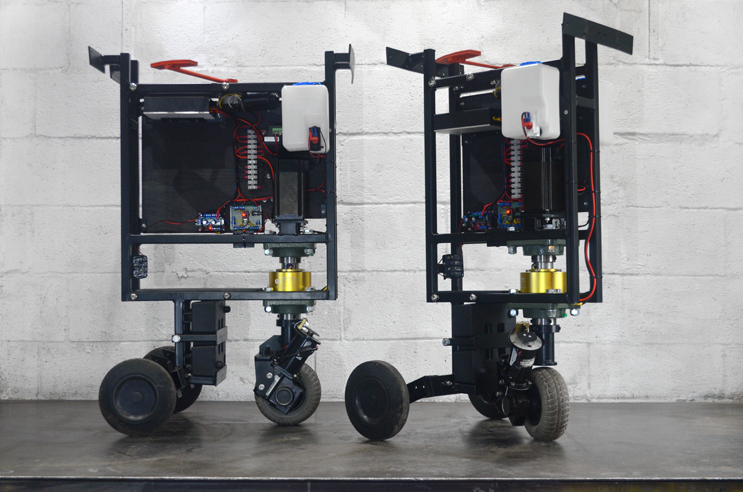 Custom ballast tanks were fabricated, for extra stability. These could be filled with water on location, then emptied afterwards to make transportation easier. There was also a removable stage weight in the base of each unit. 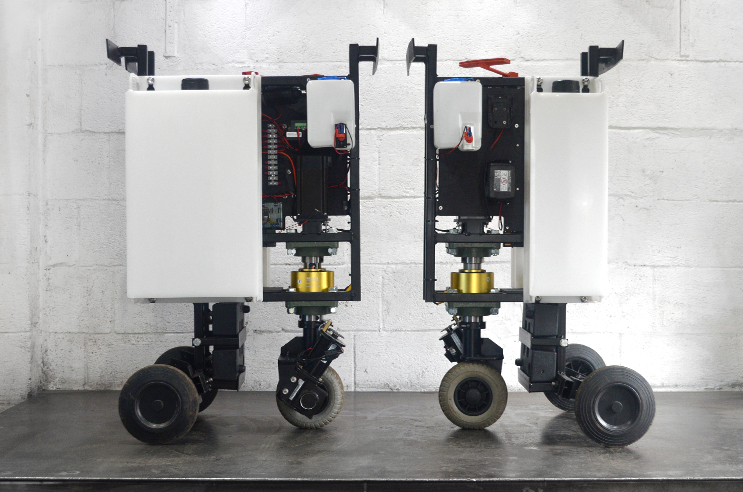 The orange component is a spinning weight for comedy wobbliness. The two small tanks are for water jets that spray passing victims. There are two pairs of jets so that when people learn to dodge one set, the second set can surprise them. 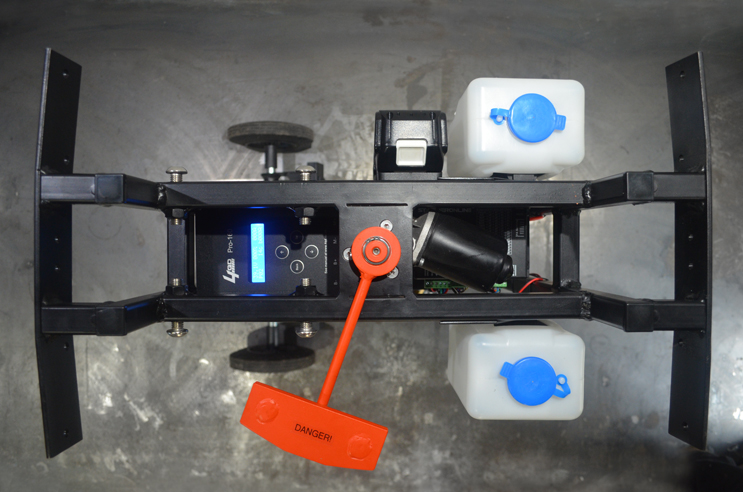 We did initially look at brushless hub motors from electric scooters, but electric wheelchair motors had far more torque. This is a 4QD Pro-160 motor driver, which has a lot of adjustable parameters for ramping etc, and can save groups of settings as presets. 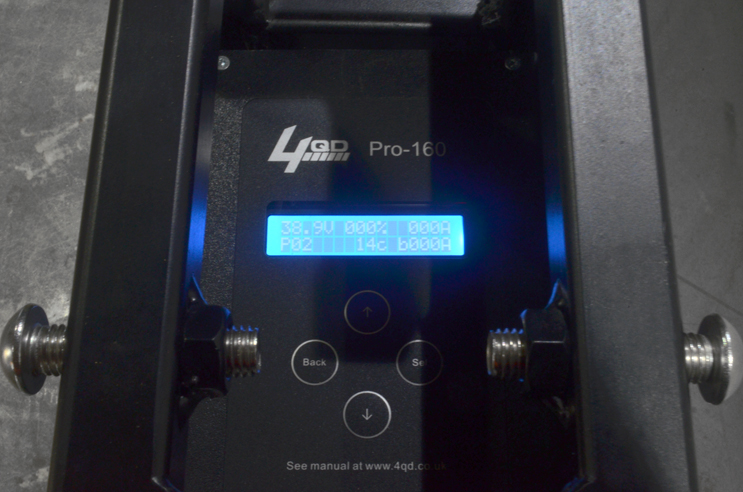 This is the driver for a "closed loop" stepper motor, used to rotate the steering column. An encoder on the rear of the motor sends positional feedback, so the system knows how far its moved.

The brake on the back of the wheelchair motor was removed and swapped for a disc with six slots. As the ratio of the worm gearbox was 25:1, this meant that an opto sensor would detect 150 pulses for every rotation of the drive wheel. This was a good way of measuring how far the bin had travelled, and gave plenty of resolution for creating pre-programmed dance routines. 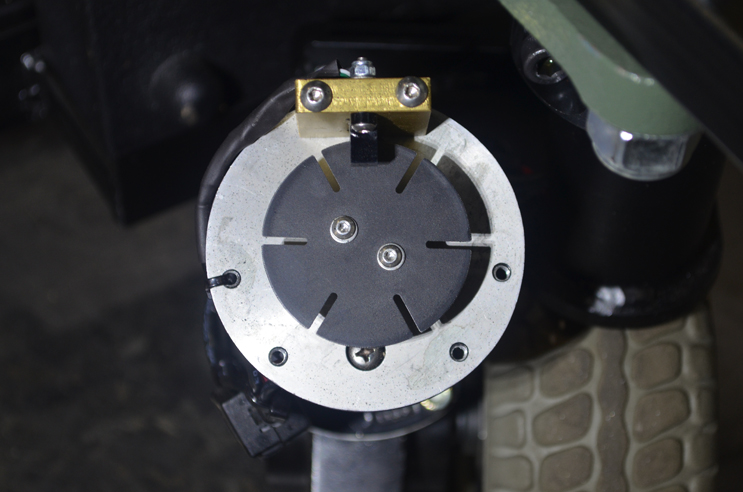 A second disc mounted to the shaft coupler between the stepper motor and the top of the steering column had a single slot. This was to find a home position on startup, so that the system knew it was pointing forwards. After that initial check, the encoder on the stepper could keep track of the steering position. 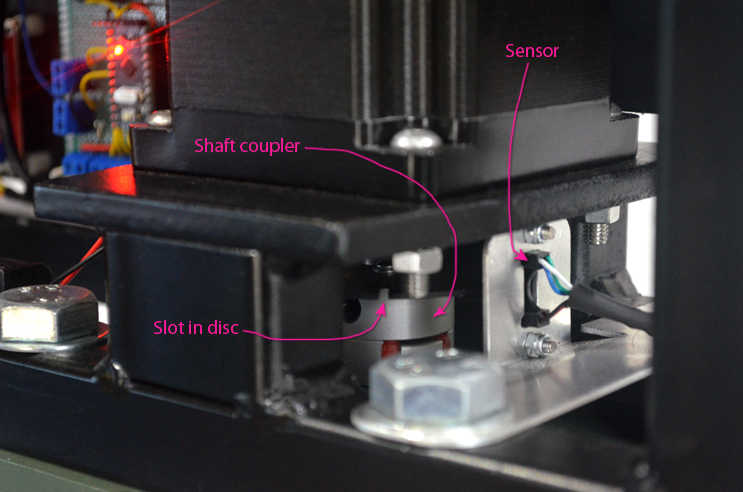 Although not contractually obliged to provide these, I fitted some amazing 50mm slip rings, which I'm definitely going to use in future projects. Slip rings allow wires to pass along to a rotating component without getting tangled. Useful for robot hands, steering columns, leslie speakers, lighthouses etc. 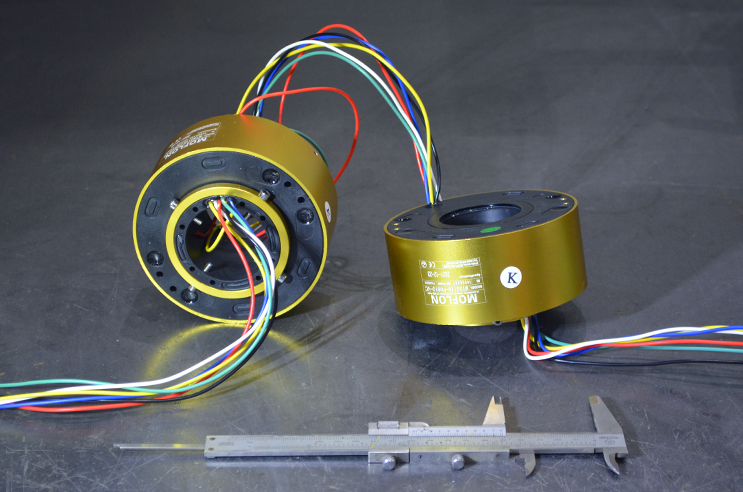 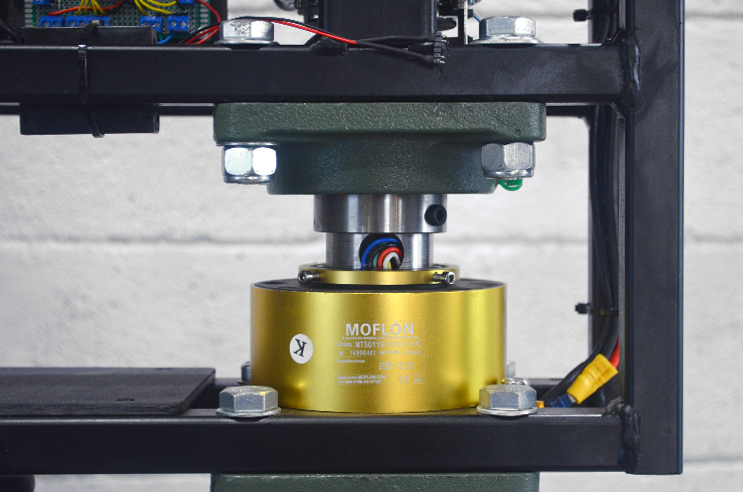 Each unit was powered by two Makita 18V batteries, which was Roger's idea, and which worked very well. 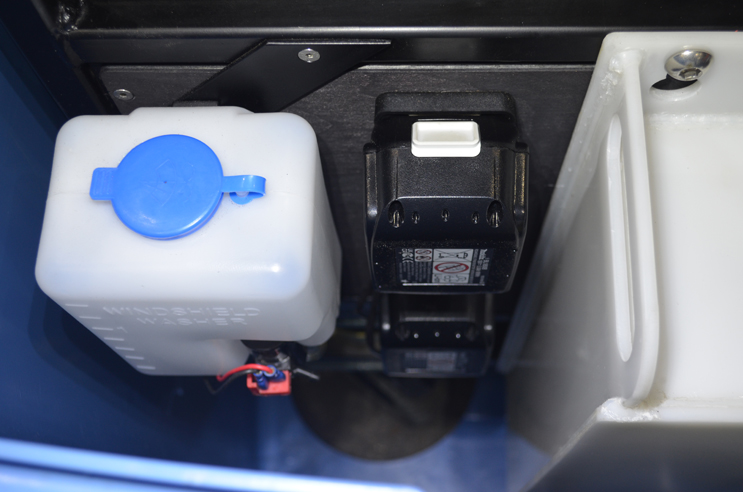 The ballast tanks were made out of polypropylene and put together with a plastic welder. I've mentioned this process elsewhere - it's a great way of making custom tanks. The tanks contained baffles, to stop the liquid sloshing around when the drive motor decelerates. 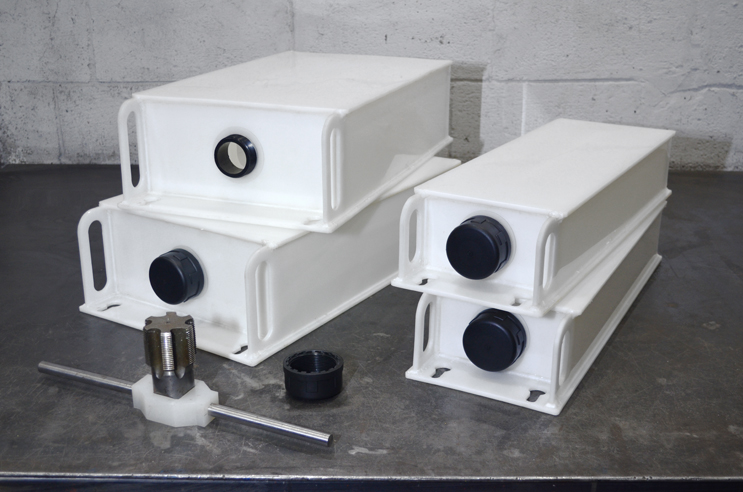 This is my biggest tap, 2" BSP, for threading holes for plumbing fittings. The homemade wrench was made in a hurry a while ago but will probably end up being used for the next 100 years. 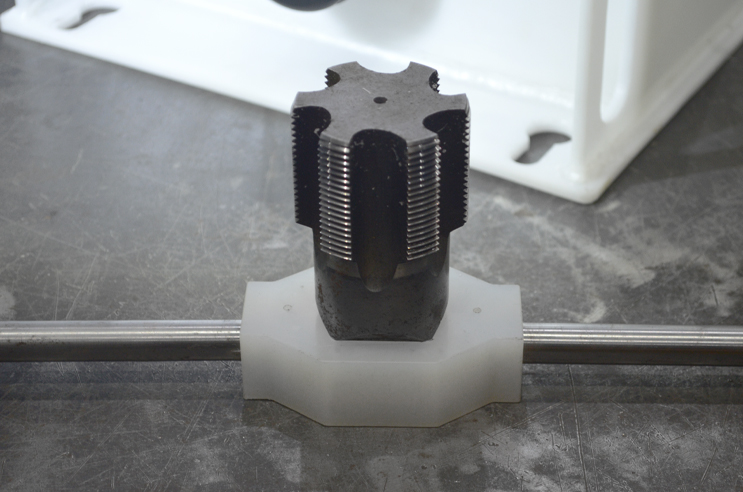 Here is a bin full of technology 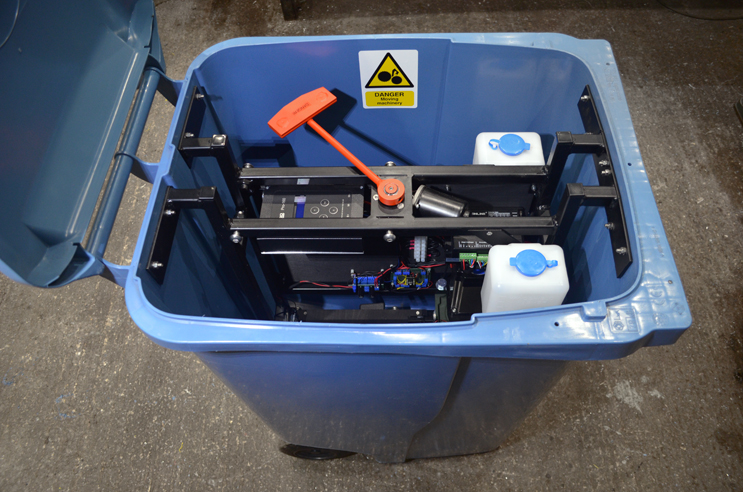 Part of the brief was to keep a 30mm gap all around the frame, so that it would be possible to add LED strip in future to make the casings glow. 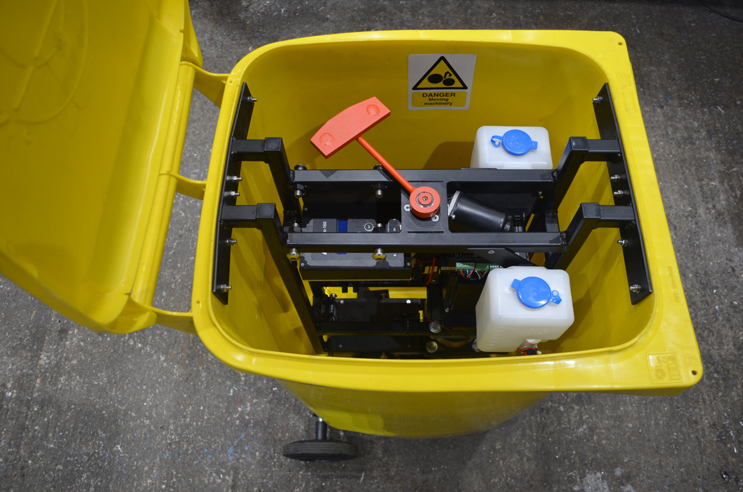 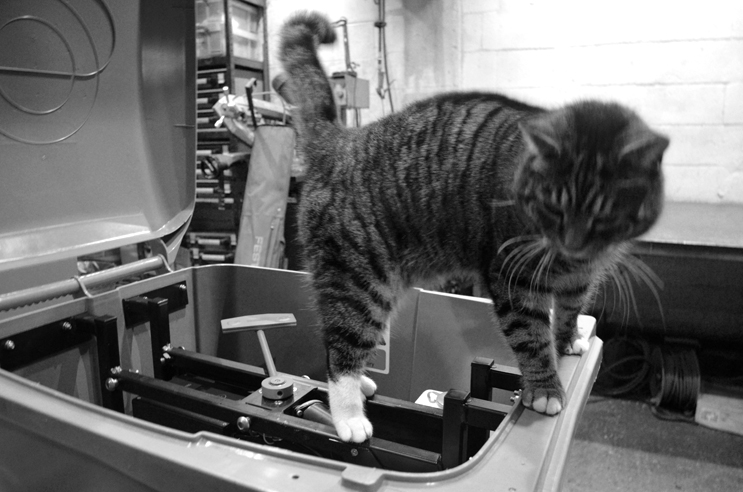 Ballast tanks fitted. They have keyhole shaped slots that allow them to attach easily. 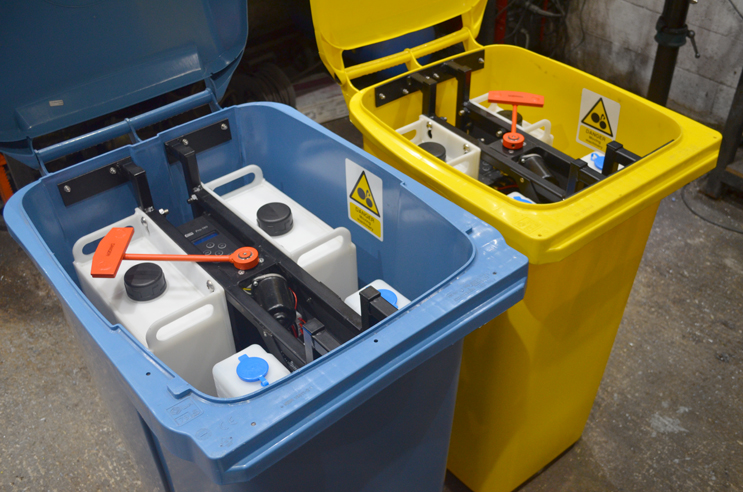 Here is a photo of two wheelie bins 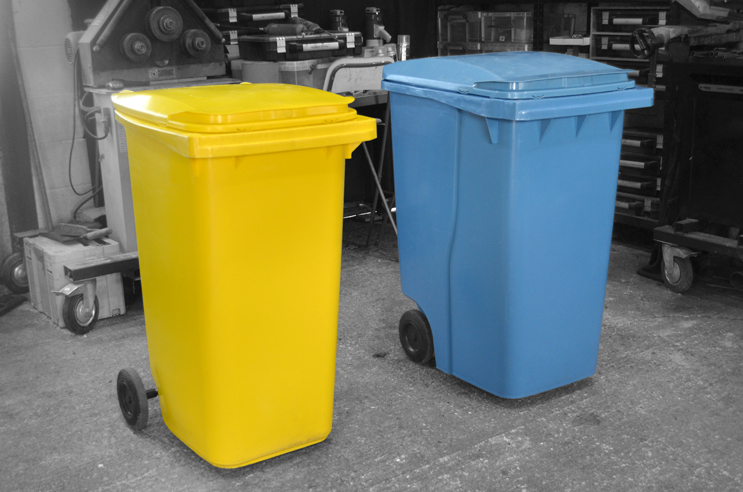 Over to Luke Garratt's for testing... 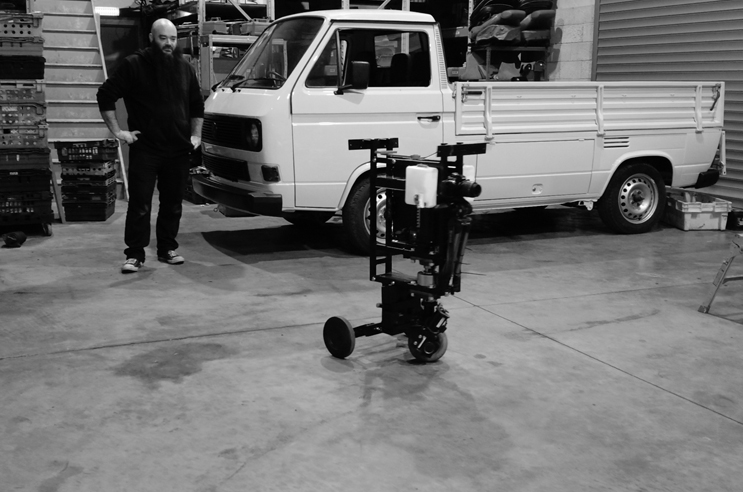 So my involvement with the project is now done, but the next stage is for a chap called "Dave no. 2" (Dave Kitschker) to fit some additional electronics, and to make the whole thing controllable from a phone screen. The bins will then join the Bureau of Silly Ideas' menagerie, and will be used to entertain children and adults.

As mentioned at the top of the page, this one went really well. A lot of elements had been tried and tested on previous projects, but the new motor drivers, drill batteries and slip rings were a great addition, and I'm keen to use them all again as soon as possible. Maybe a Nervous Squirrel funded machine for 2022 - watch this space.

The drive motors were very powerful. I suspect it would be possible to sit on the bins and ride along on them.

During early testing, before the code was fully fine tuned, the robots gleefully wreaked a path of chaos and destruction. If the speed potentiometer on the motor driver is accidentally disconnected, it defaults to max speed and takes off across the room. Lumps of plaster were knocked out of the wall, and one time it caught my T-shirt in a wheel and wound it so tight I had to cut the fabric before I could reach the power and turn it off.

The centre connection of the speed potentiometer on the 4QD driver can be controlled via arduino PWM, but a 2K pull down resistor is needed to prevent the motor from accelerating while the arduino is starting up. There's a menu option on the 4QD that overrides an error detection mode that can arise from wiring the pot to an external source.

Big thanks to Roger for asking me to do this, Dave no. 2 for taking care of the next stage, and Luke for letting me use his workshop to make this video: