In May 2009 I was lucky enough to be invited by Rob Mullender for a look around the Oramics machine, which at the time was being stored in his workshop in Brixton. I saw it a few days before it was collected by the Science Museum, who would go on to make a lovely job of restoring it.

There are plenty of sites describing how the machine works, and so I won't go in to much detail here, but basically the machine is a fascinating early synthesiser that has audio parameters controlled and sequenced by drawing on strips of clear film. The film is wound across a horizontal bed, with the graphical elements interpreted by light sensors.

Another particularly fascinating element is the wave-generating section. A shape is drawn on a glass slide, and then placed between a cathode ray tube and some light detecting components. An oscilloscope starts its cycle on the CRT, i.e. a dot traveling along the x-axis, and the y-axis is also increased at a certain rate. The dot continues along the y-axis until the light sensor detects that it has started to clear the painted area on the slide. Once this has happened the y-axis is decreased again, resulting in the path of the oscilloscope tracing the contour of the painted area. This process happens many times a second, in the audio frequency range. The rate of the x-axis gives the frequency of the note, and the y-axis gives the shape of the wave. If you drew a triangle on the slide, you would hear a triangle wave, and so on.

This system was implemented by Graham Wrench, who used technology previously developed for displaying coastlines on radar screens. There is a fascinating Sound on Sound article about it here. 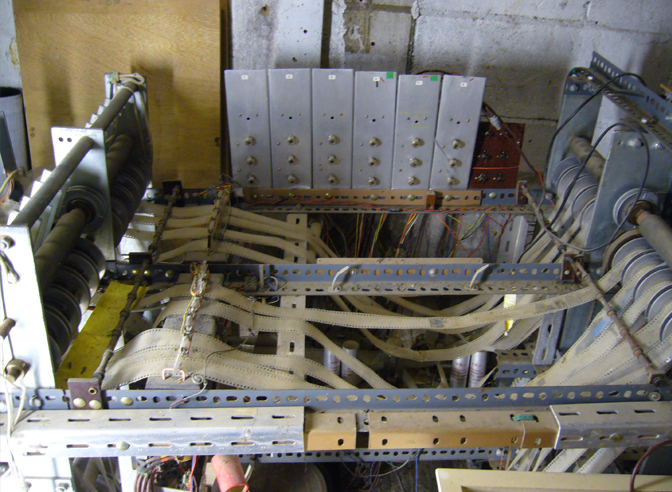 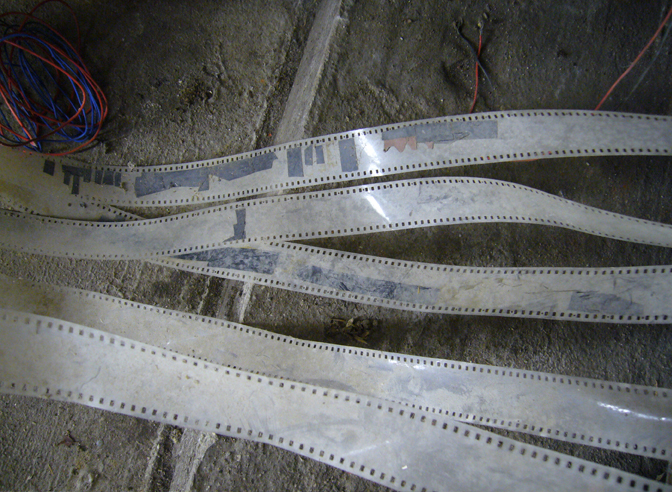 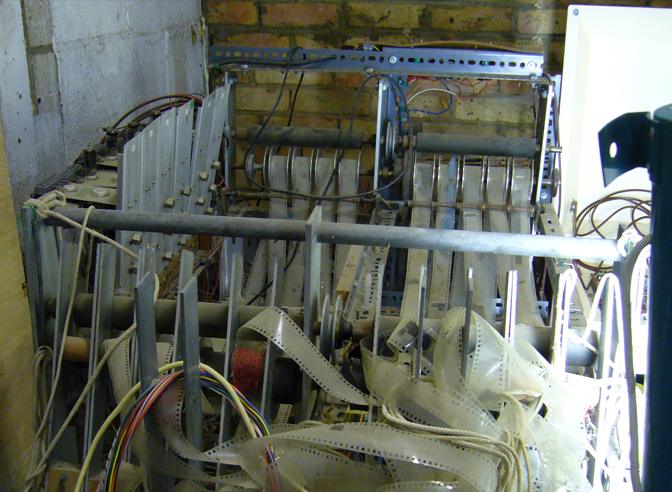 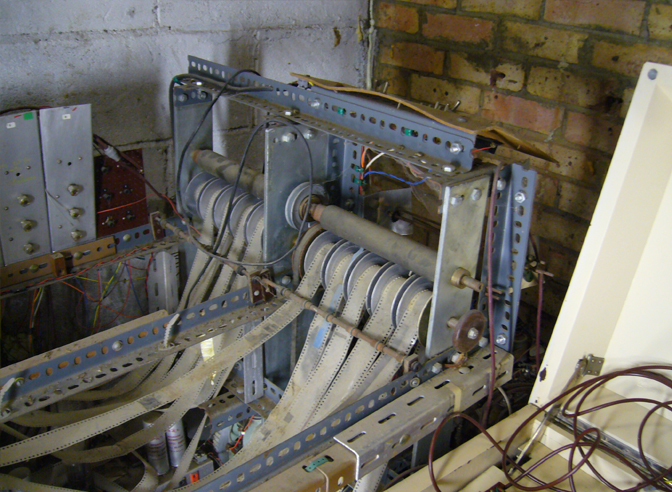 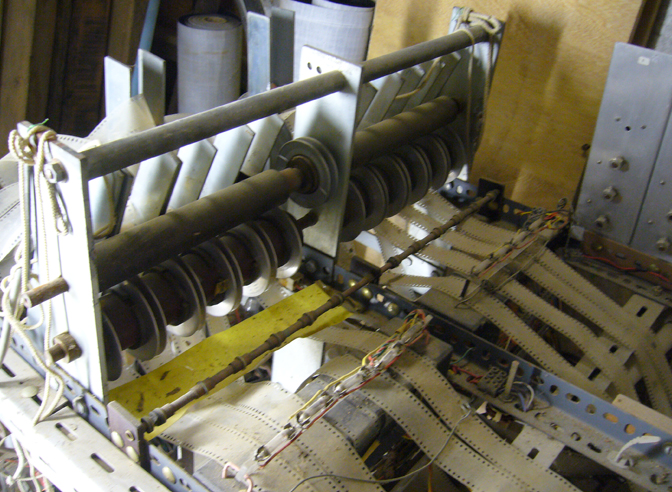 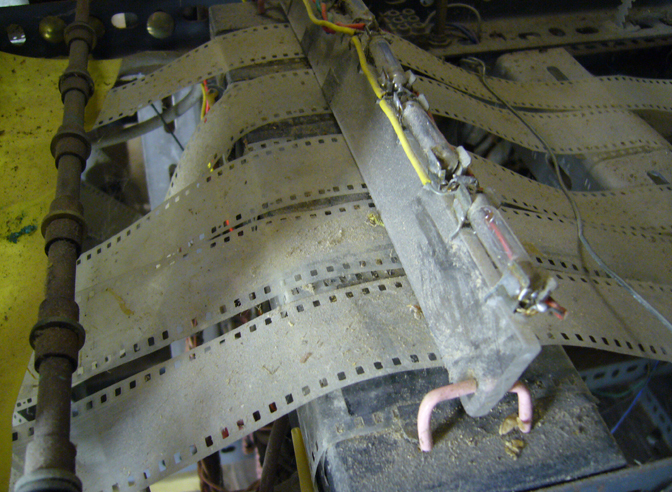 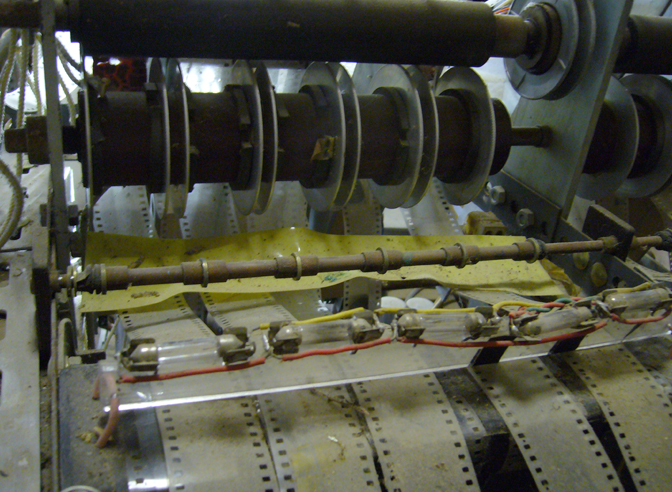 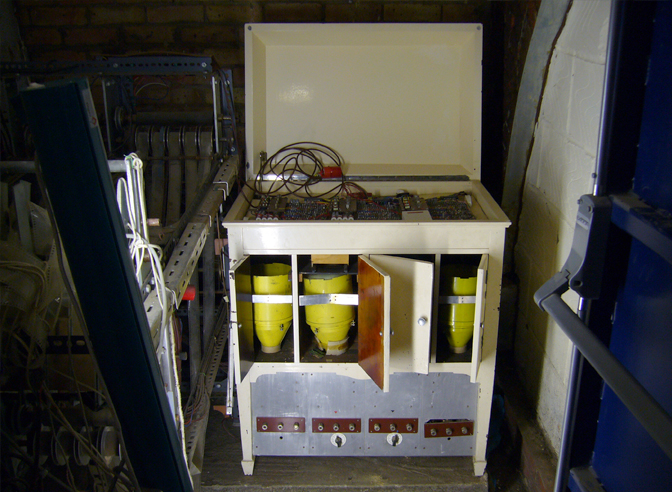 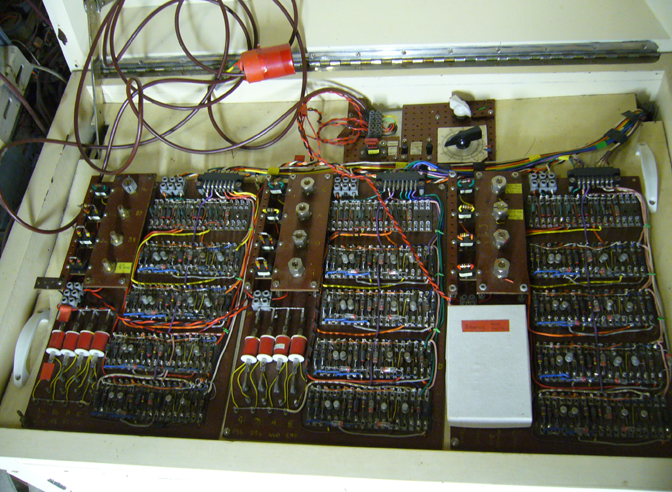 A slide with various waveforms placed above a CRT. 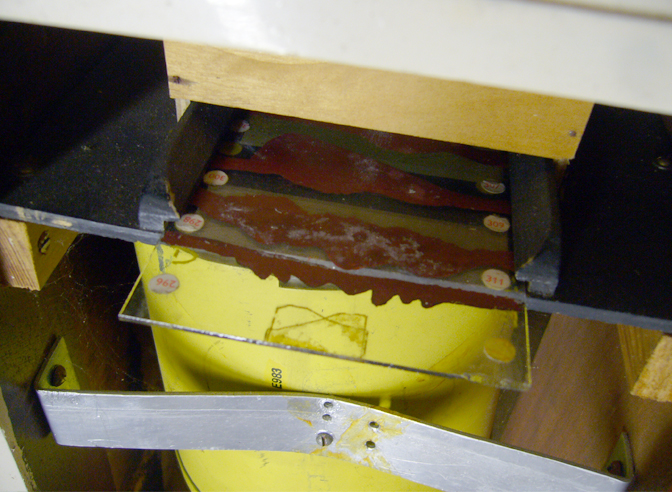 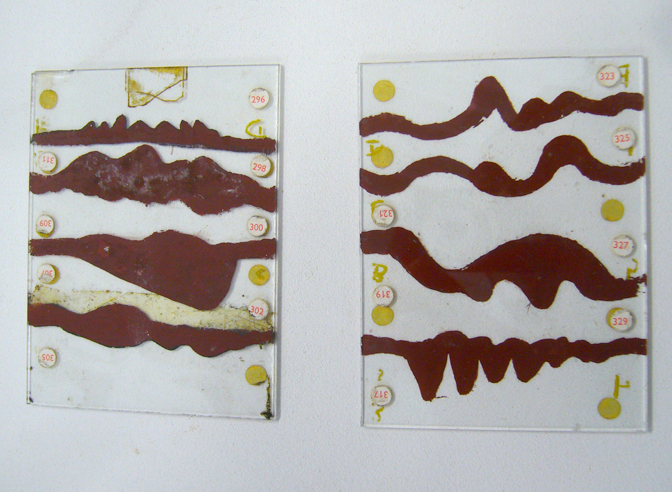 Rob said that the blue broom handle has a mysterious but specific function within the system... 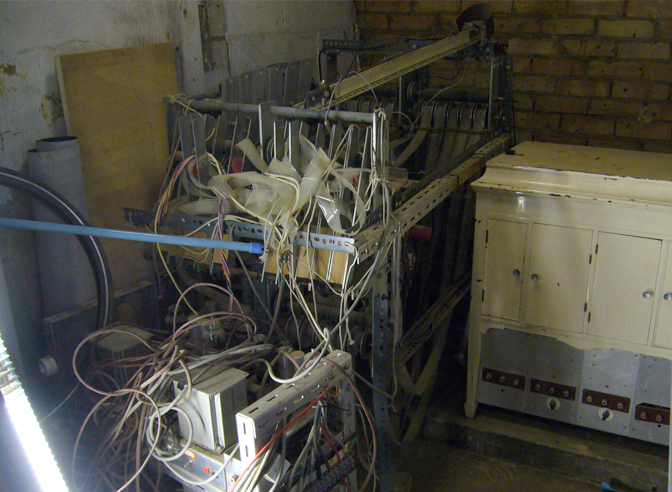 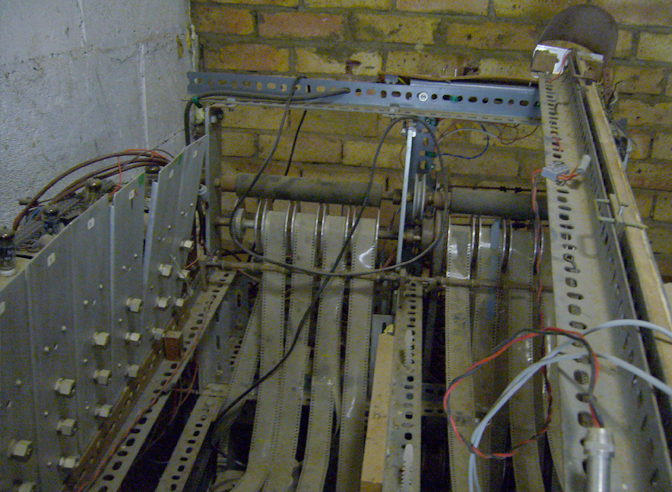 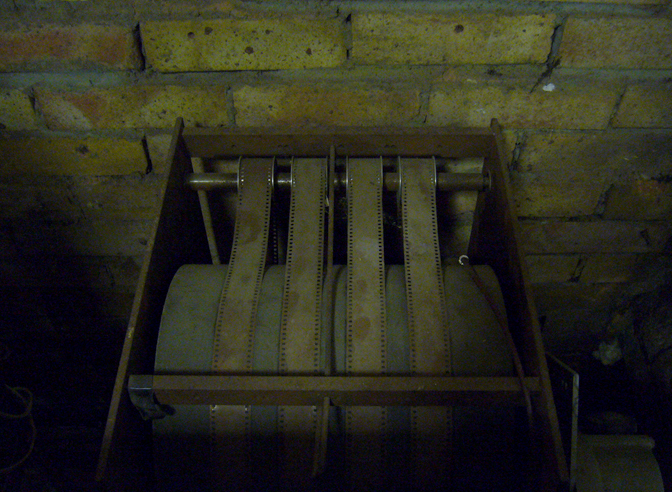 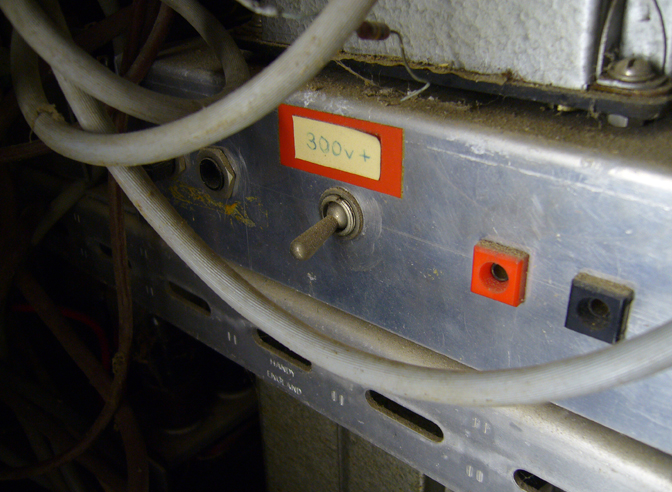 The Oramics machine about 50 years ago. 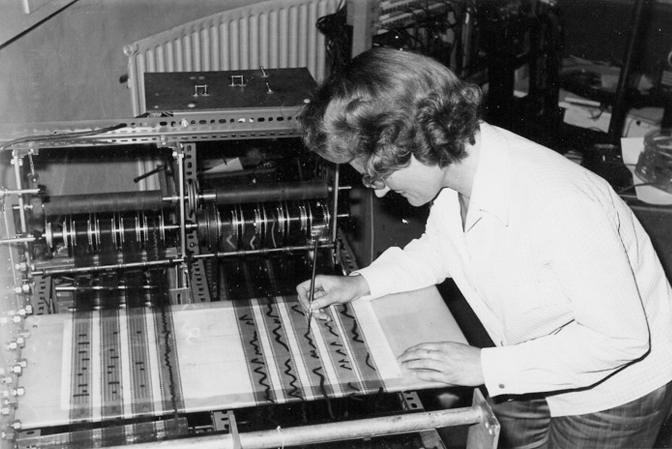 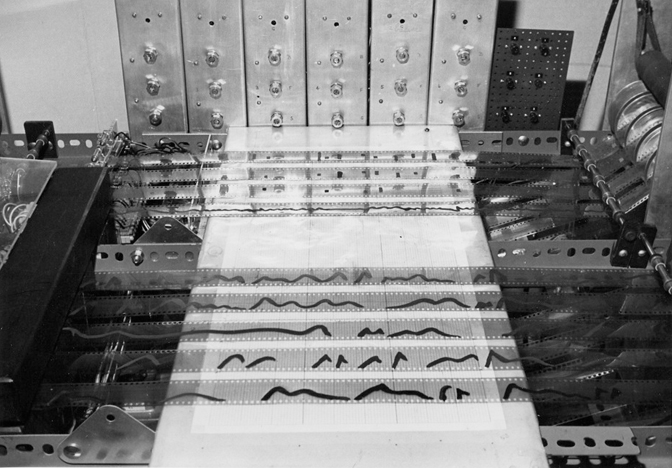 2013 update: The Oramics machine has now been restored and is on display at the Science Museum. Great to see it returned to such beautiful condition! 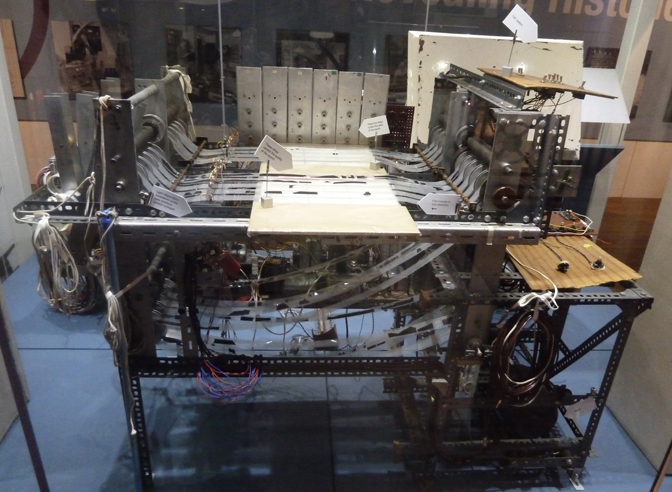 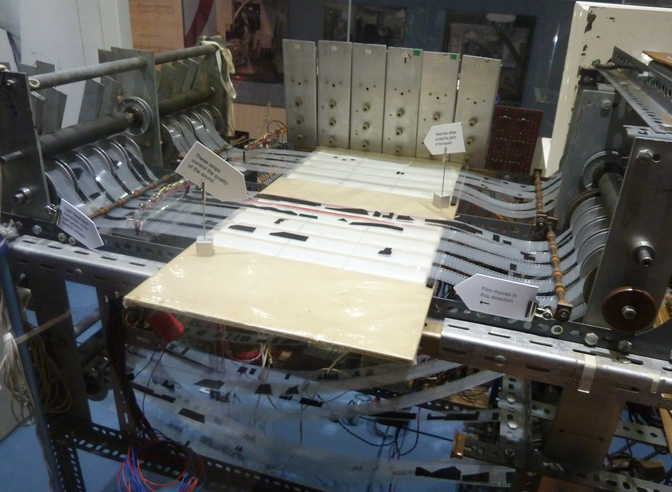 You may also be interested in Oskar Sala's Mixtur-Trautonium and this modular synthesiser.